What is Analytical Balance? An analytical balance is a highly sensitive laboratory equipment that measures mass with a high degree of precision...

This article writter by MN Editors on September 29, 2022 What is Analytical Balance?

Types of Balances and Scales

How well an analytical balance works for measuring depends a lot on its surroundings. To make sure the right conditions are in place, you need to do the following:

Calibration is required to ensure that the sample will be accurately weighed by the analytical balance. Carry out calibration procedures in the following instances:

Weighing a sample(s) that needs to be in a container or on a weighing paper:

There are two ways to calibrate an analytical balance: from the inside and from the outside. And automatic calibration is a type of calibration that comes from internal calibration.

With a single-pan analytical balance, the following rules describe the steps that must be taken in order to get accurate and reliable mass measurements. By following these rules, you will also keep the balance from getting worse.

To make sure your reports are correct, you must take the right precautions and follow the standard operating procedures.

4. Store the weights in the right manner

5. Take the right measures to weigh the samples

Because analytical balances are so accurate (they can measure to four decimal places), they are very sensitive to outside noise and to how they are set up and used. This makes it harder to read the lab balance, which could lead to wrong results.

Use of analytical balance

Analytical Balances are utilised for numerous purposes, including:

Difference between an Analytical Balance and a Precision Balance

In conclusion, an analytical balance is a better choice for your lab if you need a lot of accuracy. The accuracy of an analytical balance is between 0.0001 and 0.00001g. If it’s not important to be very precise, a top-loading scale will work just fine to measure 0.001g. There are many other kinds of balances on the market that aren’t talked about in this article. But you should look into the following if an analytical or precision balance doesn’t work for your lab. 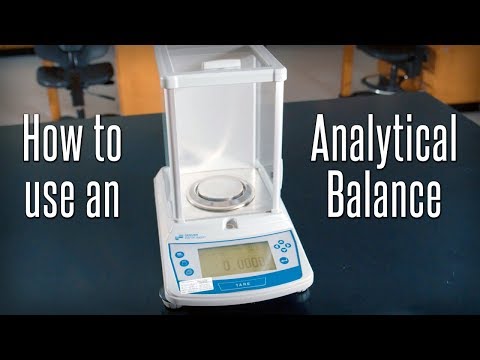 What is the minimum load weighed on analytical balance?

A basic rule of thumb states that to weigh 1 milligramme of sample, at least a 0.0001 g (Four Place) balance is required. This may still not be sufficient. We propose a minimum load of 10 milligrammes for our four-position balances (mg). Or 0.0100 g to ensure accurate measurements.

Mass is a constant measure of how much matter something has. No matter where you measure it, it’s always the same. The kilogramme and the gramme are the most common ways to measure mass.

The heaviness of an item is its weight. It is proportional to the item’s gravity multiplied by its constant mass. Due to differences in gravity, the weight of an object at the summit of a mountain will be less than the weight of the same object at the base. The newton is a unit of measurement for weight. A newton accounts for an object’s mass and relative gravity to determine its total force, which is weight.
Although mass and weight are distinct concepts, the process of ascertaining both is referred to as weighing.

The capacity of a scale to produce results that are as close to the actual value as possible. When comparing masses of one kilogramme, the accuracy of the best current balances exceeds one part in one hundred million.

The comparison between a scale or balance’s output and a standard value. Typically performed with a known reference weight and adjusted so the device delivers a consistent reading.

The maximum load that the equipment can measure.

Repeatability is the degree of agreement between repeated measurements of the same quantity. A scale may be exceptionally precise but not necessarily accurate.

This is the smallest division that can be read on the scale or balance. It might range from 0.1g to 0.0000001g. The readability of a scale refers to the number of places following the decimal point that can be read.

The process of removing a known weight of an object, often the weighing container, from a scale in order to zero it. This indicates that the final reading will reflect the weight of the material being weighed and not the weight of the container. The majority of balances permit tagging to capacity.

What is the difference between accuracy and precision?

Accuracy indicates how well a scale approximates the actual value. A faulty scale provides a reading that is not near to the actual value. Precision and accuracy are distinct concepts. Repeatedly weighing the same object on a precise scale will get the same result. A precise scale can be unreliable if it consistently returns values that are far from the actual value. For instance, a scale that reads 5.2g for the same item three times in a row is quite exact, but if the item truly weighs 6.0g, the scale is not accurate.

What is the use of analytical balance?

What are the various parts of an analytical balance?

Need a Note? Request us
Request
If you have any doubt, Ask Questions Here
0
Analytical Balance