What is Colony Counter? In clinical, food, dairy, and pharmaceutical microbiology, taking a total microbial count or total viable count is a... What is Colony Counter?

There are two sorts of colony counters, including; 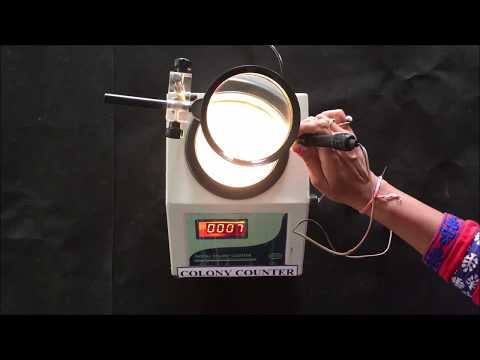 To avoid contaminating the petri dish with pen ink, counting can be performed using one of the following methods:

The unique characteristic of this instrument is that it is compatible with any marker pen with a hard point. You are not restricted to utilising a specialised pen.

Why switch to an automated colony counter?

In an effort to standardise count results and enhance traceability, a growing number of laboratories are adopting automated and semi-automatic colony counters. These methods not only accelerate the testing process, but also generate a consistent pattern of data that removes human error and variation. In recent years, there has also been a push for ‘lean laboratory’ efforts, which aim to enhance throughput and efficiency by focusing on value-added activities and minimising inefficient lab operations. Colony counting is one of the easiest processes to automate, as automated colony counters can analyse up to 75 plates in 5 minutes. This can free up a substantial amount of time for laboratory analysts to devote to “value-added” duties and initiatives.

What is the Importance of Colony Counting?

Microorganisms are extremely difficult to count directly, which is one of the primary reasons colony counting is so important. This is nearly entirely attributable to their size; they are simply too little to calculate with adequate precision. Consequently, calculating CFUs is the best alternative. Once an exact plate count is obtained, not only do you have a better sense of how many microorganisms are present, but you also know how many COULD be there in the future.

Counting colonies is a practise utilised in various businesses, including food and beverage companies. The FDA strictly regulates the presence of bacteria and other germs; therefore, understanding your colony counts ensures that you’re releasing harmless items. This also ensures that your organisation is up-to-date on any compliance laws or regulations it must observe.

In a more medical atmosphere, there are also a number of significant applications. Knowing more about the concentration of microorganisms in the blood might better tell medical practitioners about a patient’s condition. If you know the concentration of germs in a person’s blood, you may also monitor the progression of an infectious disease and their immune system’s strength.

Need a Note? Request us
Request
If you have any doubt, Ask Questions Here
0
Colony Counter